Within a week or two of moving to Wivey a painter told me that her frustration with the countryside here is that it is clearly very beautiful but that there is nowhere to get above it.  The close, steep but gentle hills huddle together and there is often a haze in the air; I found myself agreeing that it is such a shame there are no great vantage points to take in the view.

But then I started walking. And when the dog arrived, we explored further and further footpaths. While there is no great platform for an art class to set up their easels, there are plenty of places where you achieve some height and happen upon a view of familiar locations from above or afar; where the countryside suddenly makes sense. You do have to walk out to find them though.

It happened today with Huish Champflower. Huish is hard to get a feel for topographically.  The village feels like it’s wrapped around a hill but also that you drop down into it. You have to turn off to keep going on the roads and the village hall is strangely slung higher up the slope. From the hall a dramatic vista of the trees of Cleve wood appears, densely covering the long side of Heydon Hill. But back down in the village I find it hard to point in the direction of anywhere else with certainty.

Yet the other evening curiosity kicked in as I climbed Maundown Hill and I followed the lane over its back instead of looping around the ridge and descending back into town. Within a few minutes I caught a glimpse of a quilt of lush green fields; a few minutes more and I was leaning on a gate staring at an incredible view of Huish in its verdant environment, clearly positioned on the end of a rolling ridge, flanked by other ridges, all decked in pasture or trees. Suddenly the comically sloping cricket pitch – on which opposite fielders can’t see each other over the wicket in the middle – made sense because it saddles the Huish ridge. The church, which I assumed was the centre of the settlement, is actually over to the side. The whole scene not only became cohesive, but the evening light threw shadows into the checkered fields and beatified the view.

The photo shows a glimpse, but not the breadth of the vista, as I only had my telephoto lens. Worthy of a painting, though, I’d say. 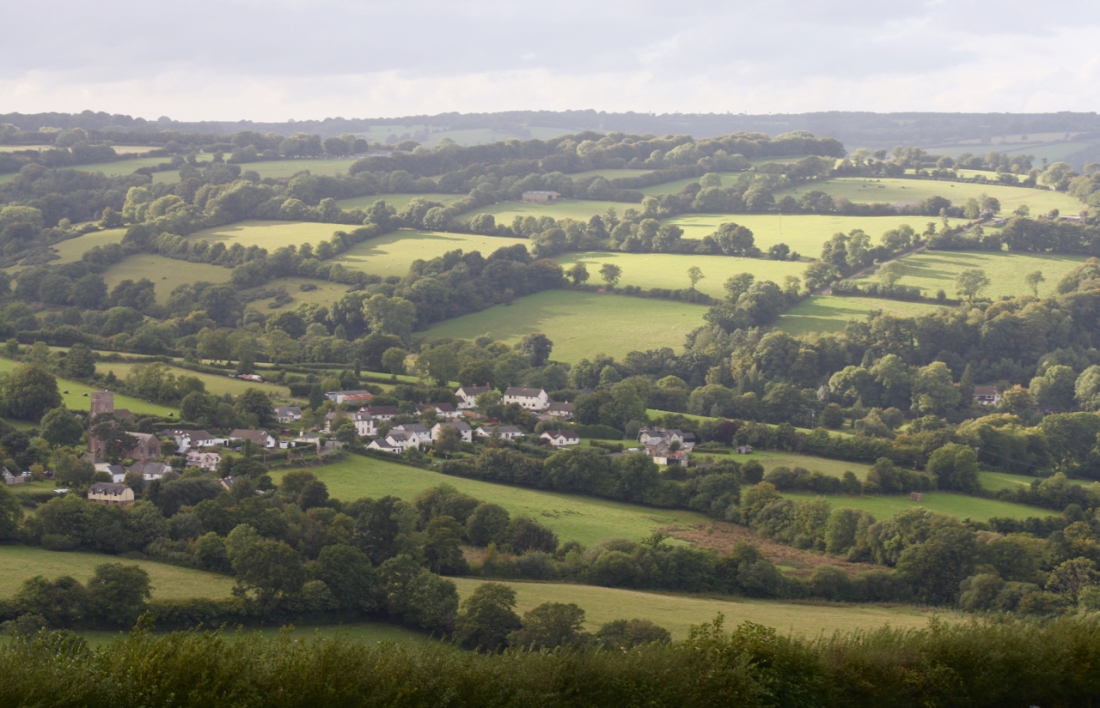